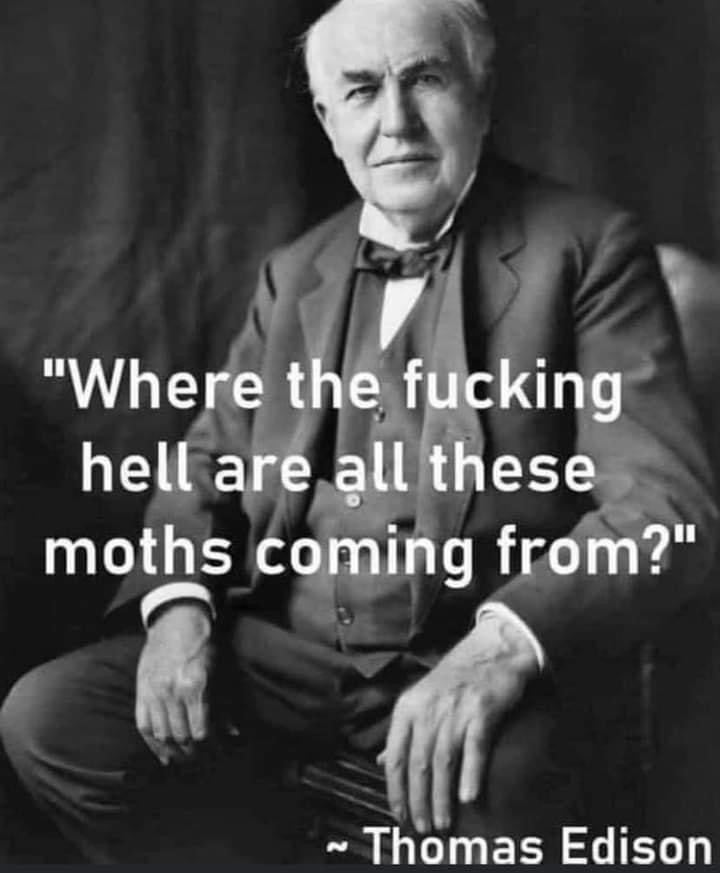 My Aunt has been in hospital recently. She’s doing okay and has been passing the time by playing board games such as backgammon, draughts and mahjong.
“Any chess?” I asked.
“No, I went private”.

So a Nun, a Rabi, a Lion, a Zombie, a Leprechaun, a goldfish, a Space Alien, a pair of Siamese twins, a man in an iron lung and a blonde walk into a bar.
The bartender looks at them and says, "Is this some kind of a joke?" 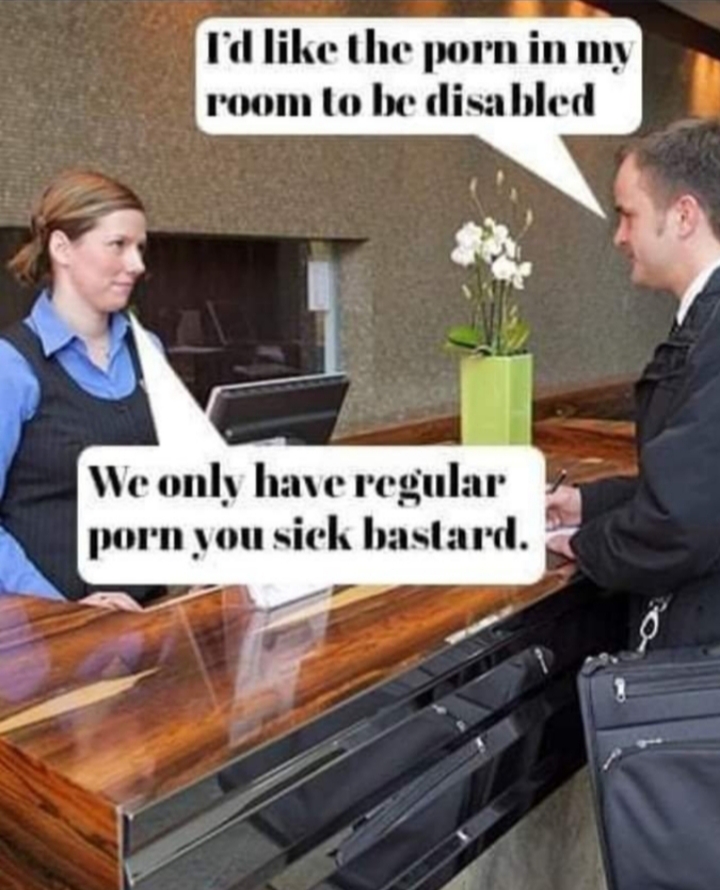 An attractive blonde from Cork , Ireland, arrived at the casino. She seemed a little intoxicated and bet twenty thousand dollars in a single roll of the dice.

She said: "I hope you don't mind, but I feel much luckier when I'm completely nude." With that, she stripped from the neck down, rolled the dice and with an Irish brogue yelled: "Come on, baby, Mama needs new clothes!"

As the dice came to a stop, she jumped up and down and squealed: "Yes! Yes! I won, I won!" She hugged each of the dealers, picked up her winnings and her clothes and quickly departed.

The dealers stared at each other dumbfounded. Finally, one of them asked: "What did she roll?"

The other answered: "I don't know - I thought you were watching."

MORAL OF THE STORY

What Starts with F and ends with K
A first-grade teacher, Ms Brooks, was having trouble with one of her students. The teacher asked, 'Harry, what's your problem?'
Harry answered, 'I'm too smart for the 1st grade. My sister is in the 3rd grade and I'm smarter than she is! I think I should be in the 3rd grade too!'
Ms.. Brooks had enough. She took Harry to the principal's office.
While Harry waited in the outer office, the teacher explained to the principal what the situation was. The principal told Ms. Brooks he would give the boy a test. If he failed to answer any of his questions he was to go back to the 1st grade and behave. She agreed.
Harry was brought in and the conditions were explained to him and he agreed to take the test.
Principal:
'What is 3 x 3?'
Harry:
'9.'
Principal:
'What is 6 x 6?'
Harry:
'36.'
And so it went with every question the principal thought a 3rd grader should know.
The principal looks at Ms. Brooks and tells her,'I think Harry can go to the 3rd grade'
Ms. Brooks says to the principal, 'Let me ask him some questions..'
The principal and Harry both agreed.
Ms.. Brooks asks, 'What does a cow have four of that I have only two of?'
Harry, after a moment:'Legs..'
Ms Brooks: 'What is in your pants that you have but I do not have?'
The principal wondered why would she ask such a question!
Harry replied: 'Pockets.'
Ms. Brooks: 'What does a dog do that a man steps into?'
Harry:
'Pants.'
The principal sat forward with his mouth hanging open.
Ms. Brooks: 'What goes in hard and pink then comes out soft and sticky?'
The principal's eyes opened really wide and before he could stop the answer, Harry replied,'Bubble gum.'
Ms. Brooks: 'What does a man do standing up, a woman does sitting down and a dog does on three legs?'
Harry: 'Shake hands.'
The principal was trembling.
Ms.. Brooks: 'What word starts with an 'F' and ends in 'K' that means a lot of heat and excitement?'
Harry:
'Firetruck.'
The principal breathed a sigh of relief and told the teacher, 'Put Harry in the fifth-grade, I got the last seven questions wrong...'

Two blokes in their mid twenties are sitting at a bar having a beer,
One of them remarks to the other ''Boy you look really tired!''
His friend replies, ''Dude, I'm exhausted, my girlfriend wants sex all the time! Three, four sometimes six times a night! She wakes me at all hours, I just don't know what to do''.
A Gentleman in his 70s is sitting a few bar stools down from them overhears their conversation. He looks at the two younger men, and showing the wisdom of his age says, ''Marry her. That'll put an end to all that nonsense!''

The galley slaves were taking a rest after a full day rowing under merciless sun with the sound of the slave driver's pacing gong still ringing in their ears.

"It's not the captain's water skiing that bothers me so much" said one slave to his shipmate. "It's that gong, gong, gong every two seconds. I'm going to get rid of it"

The slaves decide that under cover of darkness, they would lift the gong from its chains and throw it overboard.
"We can't do it like that" suggested one of the plotters: "They would be sure to hear us - we'll have to find a way to slip it quietly into the water."

So that night, six of the slaves lifted the heavy gong and carried it carefully to the stern of the galley - but there was no way to slip the gong over the side and into the water without banging it noisily on the boat.

"I have it! - I'll slip under the rail and hold on with my back to the stern, then I will act as a slide for you to ease the gong over my body and quietly into the water," said the brightest of the slaves.

This was working perfectly, when suddenly the slave driver appeared behind the plotters.

"What the hell do you think you're doing?" he shouted.
To a man, the men sprang to attention, and burst into song ...

(Legs it with great velocity.

Just for a change, a clean joke.
.
Jill is a primary school teacher and often has to help her pupils wth dressing. One morning little Joe struggles to get his boots on and she has to do it for him.
"They are tight," Jill says as her fingers become sore from the effort. "Are you sure they're your boots?"
"They're my brother's," Joe replies. "But he's bigger than me."
Eventually the poor woman has to give up. "Well, at least we can keep your hands warm," she says. "Where are your gloves?"
"Inside my boots!" he replies.

If you ever feel like your job is pointless and a waste of time,
somebody, somewhere, is fitting an indicator to a new BMW 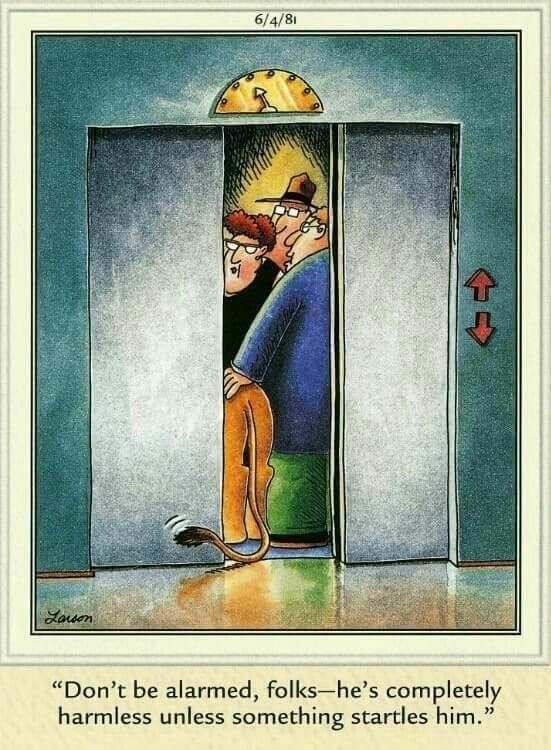 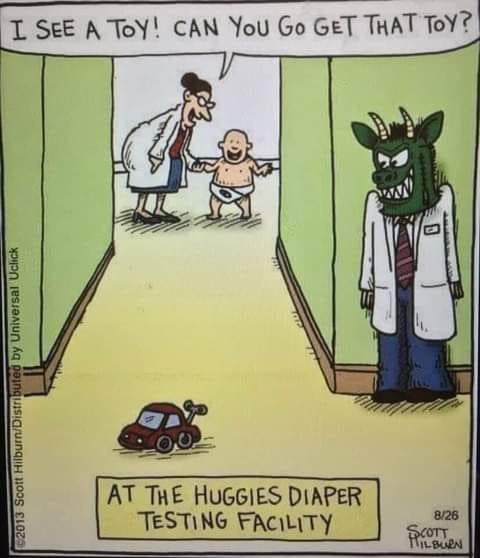 I've got new job, really well paid and all I have to do is walk along the beaches near Sellafield. I had to carry a Geiger Counter, and I couldn't work out why ..... then it clicked !!

I've got family scattered about throughout the Black Country. Got sent this by them yesterday and believe me I needed the laugh ... bloody chemo train has hit me dead on. I AY A BRUMMIE !!! 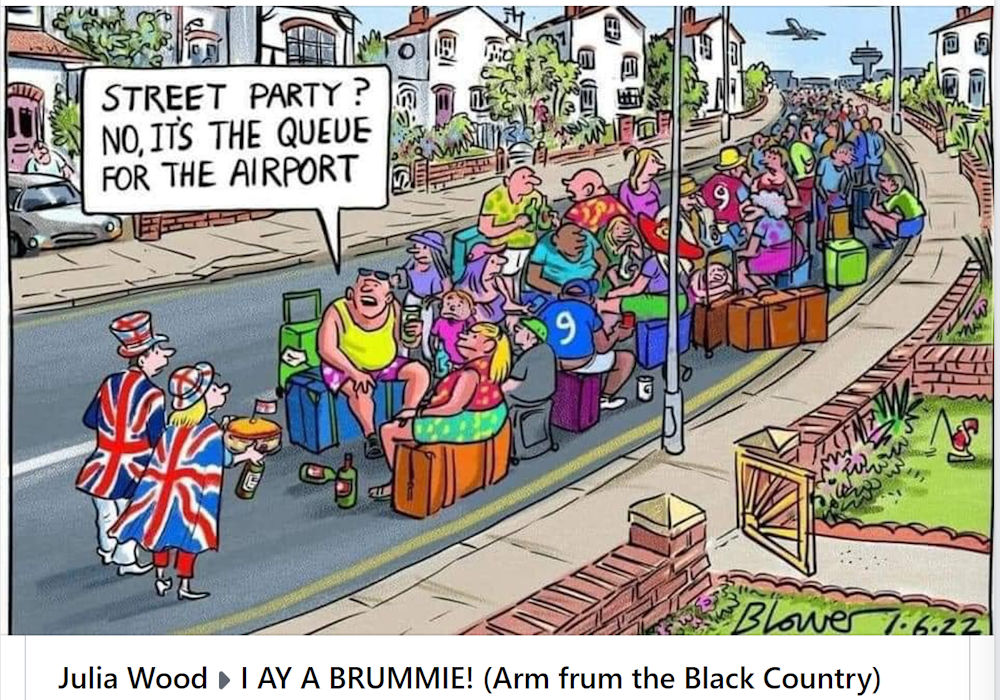 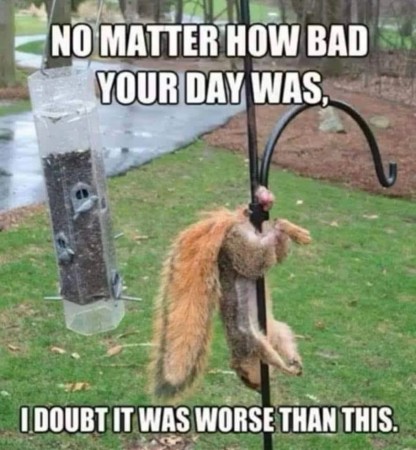 A duck walks into a pub and orders a pint of beer and a ham sandwich.
The barman looks at him and says, "Hang on! You're a duck."
"I see your eyes are working," replies the duck.
"And you can talk!" exclaims the barman.
"I see your ears are working, too," says the duck. "Now if you don't mind, can I have my beer and my sandwich please?"
"Certainly, sorry about that," says the barman as he pulls the duck's pint. "It's just we don't get many ducks in this pub..
What are you doing round this way?"
"I'm working on the building site across the road," explains the duck. "I'm a plasterer."
The flabbergasted barman cannot believe the duck and wants to learn more, but takes the hint when the duck pulls out a newspaper from his bag and proceeds to read it.
So, the duck reads his paper, drinks his beer, eats his sandwich, bids the barman good day and leaves.
The same thing happens for two weeks..
Then one day the circus comes to town.
The ringmaster comes into the pub for a pint and the barman says to him "You're with the circus, aren't you? Well, I know this duck that could be just brilliant in your circus. He talks, drinks beer, eats sandwiches, reads the newspaper and everything!"
"Sounds marvelous," says the ringmaster, handing over his business card. "Get him to give me a call."
So the next day when the duck comes into the pub the barman says, "Hey Mr. Duck, I reckon I can line you up with a top job, paying really good money."
"I'm always looking for the next job," says the duck. "Where is it?"
"At the circus," says the barman.
"The circus?" repeats the duck.
"That's right," replies the barman.
"The circus?" the duck asks again. "That place with the big tent?"
"Yeah," the barman replies.
"With all the animals who live in cages, and performers who live in caravans?" says the duck.
"Of course," the barman replies.
"And the tent has canvas sides and a big canvas roof with a hole in the middle?" persists the duck.
"That's right!" says the barman.
The duck shakes his head in amazement, and says .. . ..
"What the f**k would they want with a plasterer???!!!

Probably posted this before, but here goes -

My Favorite Animal
Our teacher asked what my favorite animal was, and I said, "Fried chicken."
She said I wasn't funny, but she couldn't have been right, because everyone else laughed.
My parents told me to always tell the truth. I did. Fried chicken is my favorite animal.
I told my dad what happened, and he said my teacher was probably a member of PETA. He said they love animals .......very much.
I do, too. Especially chicken, pork and beef. Anyway, my teacher sent me to the headmasters office.
I told him what happened, and he laughed, too. Then he told me not to do it again.
The next day in class my teacher asked me what my favorite live animal was.
I told her it was chicken. She asked me why, so I told her it was because you could make them into fried chicken.
She sent me back to the Headmasters office. He laughed, and told me not to do it again.
I don't understand. My parents taught me to be honest, but my teacher doesn't like it when I am.
Today, my teacher asked me to tell her what famous person I admired most.
I told her, "Colonel Sanders." Guess where I am now... 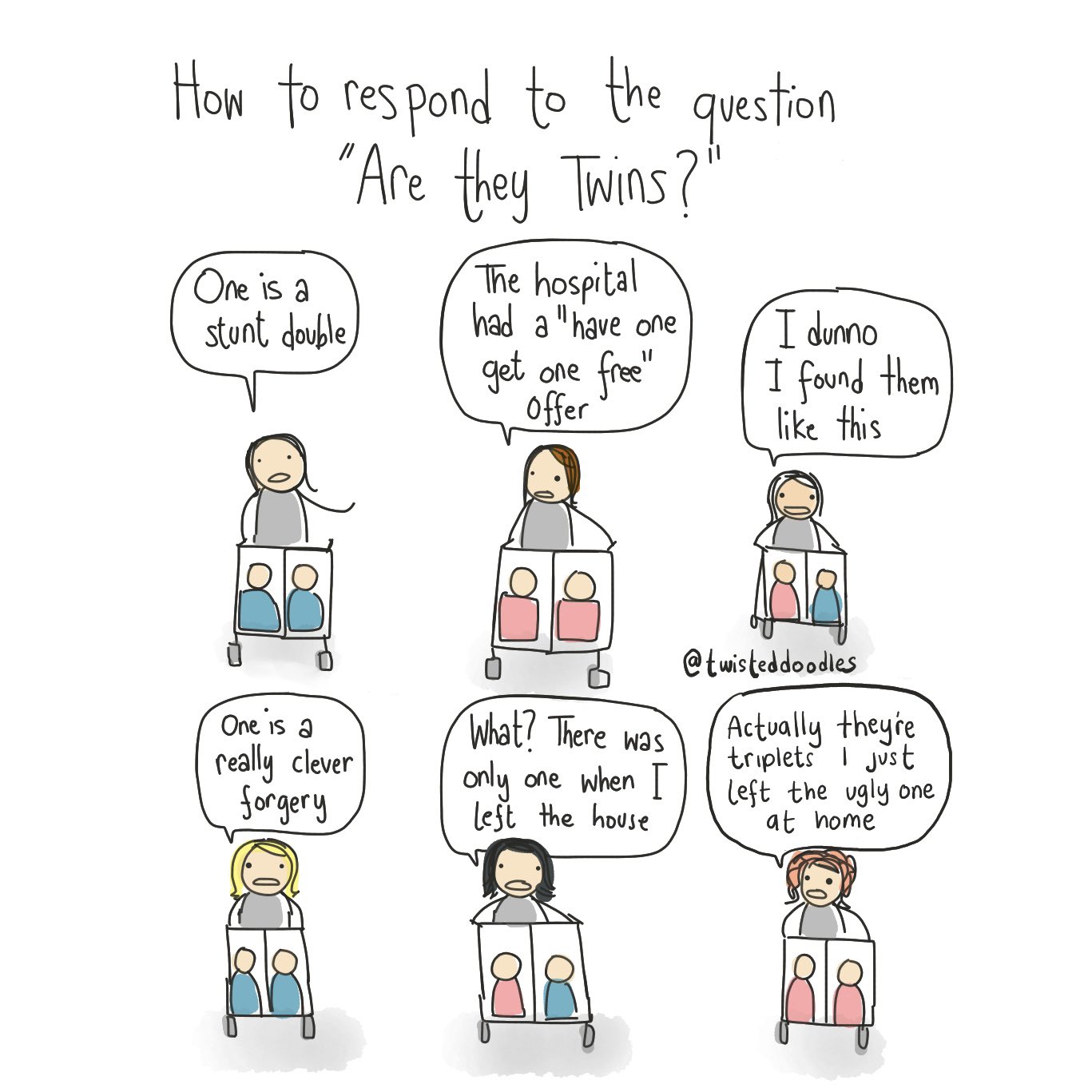 Graham Martin is in hospital.
So who the hell is Graham Martin you might ask ?
Well, Graham is the fellah who got home late one night and Helen, his wife, says: "Where the hell have you been ?"
Graham replies: "I was getting a tattoo."
"A tattoo ?" she frowned. "What kind of tattoo did you get ?"
"I got a hundred dollar bill tattooed onto my privates," he replied proudly.
"What the hell were you thinking ?" she asked, shaking her head in disgust. "Why on Earth would a chartered accountant get a hundred dollar bill tattooed onto his privates ?"
Graham replied:
"Well ...
One: I like to watch my money grow.
Two: Once in a while I like to play with my money.
Three: I like how money feels in my hand.
... and lastly .. instead of going out shopping, you can stay right here at home and blow a hundred dollars anytime you want !!"