Stafford has some odd features - as well as no longer having a Platform 2 at the station, I've always wondered about the three A34 exits off the Redhill roundabout. I don't think that I've seen that sort of thing occur anywhere else. 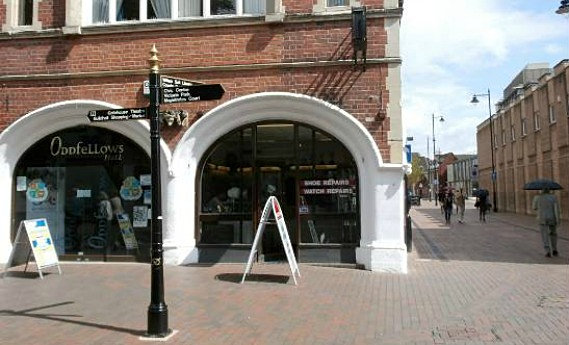 No, not the hall - the chap walking down Tipping Street with a brolly.

No, not the hall - the chap walking down Tipping Street with a brolly.
Click to expand...

You think he's odd? We all love him!

The people of Stafford are a weird lot, no-one in Stafford seems to come from Stafford, & no-one talks to anyone....except on here...& me - I'll talk to anyone!
S

I've done a fair bit of travelling in the past few years, and Stafford actually strikes me as more boring rather than odd.

"PUTTING up for the night in one of the chiefest towns of Staffordshire, I find it to be by no means a lively town. In fact, it is as dull and dead a town as any one could desire not to see. It seems as if its whole population might be imprisoned in its Railway Station. The Refreshment Room at that Station is a vortex of dissipation compared with the extinct town-inn, the Dodo, in the dull High Street.

Why High Street? Why not rather Low Street, Flat Street, Low- Spirited Street, Used-up Street? Where are the people who belong to the High Street? Can they all be dispersed over the face of the country, seeking the unfortunate Strolling Manager who decamped from the mouldy little Theatre last week, in the beginning of his season (as his play-bills testify), repentantly resolved to bring him back, and feed him, and be entertained? Or, can they all be gathered to their fathers in the two old churchyards near to the High Street - retirement into which churchyards appears to be a mere ceremony, there is so very little life outside their confines, and such small discernible difference between being buried alive in the town, and buried dead in the town tombs? Over the way, opposite to the staring blank bow windows of the Dodo, are a little ironmonger's shop, a little tailor's shop (with a picture of the Fashions in the small window and a bandy-legged baby on the pavement staring at it) - a watchmakers shop, where all the clocks and watches must be stopped, I am sure, for they could never have the courage to go, with the town in general, and the Dodo in particular, looking at them. Shade of Miss Linwood, erst of Leicester Square, London, thou art welcome here, and thy retreat is fitly chosen! I myself was one of the last visitors to that awful storehouse of thy life's work, where an anchorite old man and woman took my shilling with a solemn wonder, and conducting me to a gloomy sepulchre of needlework dropping to pieces with dust and age and shrouded in twilight at high noon, left me there, chilled, frightened, and alone. And now, in ghostly letters on all the dead walls of this dead town, I read thy honoured name, and find that thy Last Supper, worked in Berlin Wool, invites inspection as a powerful excitement!

Where are the people who are bidden with so much cry to this feast of little wool? Where are they? Who are they? They are not the bandy-legged baby studying the fashions in the tailor's window. They are not the two earthy ploughmen lounging outside the saddler's shop, in the stiff square where the Town Hall stands, like a brick and mortar private on parade. They are not the landlady of the Dodo in the empty bar, whose eye had trouble in it and no welcome, when I asked for dinner. They are not the turnkeys of the Town Jail, looking out of the gateway in their uniforms, as if they had locked up all the balance (as my American friends would say) of the inhabitants, and could now rest a little. They are not the two dusty millers in the white mill down by the river, where the great water-wheel goes heavily round and round, like the monotonous days and nights in this forgotten place. Then who are they, for there is no one else? No; this deponent maketh oath and saith that there is no one else, save and except the waiter at the Dodo, now laying the cloth. I have paced the streets, and stared at the houses, and am come back to the blank bow window of the Dodo; and the town clocks strike seven, and the reluctant echoes seem to cry, 'Don't wake us!' and the bandy-legged baby has gone home to bed.

If the Dodo were only a gregarious bird - if he had only some confused idea of making a comfortable nest - I could hope to get through the hours between this and bed-time, without being consumed by devouring melancholy. But, the Dodo's habits are all wrong. It provides me with a trackless desert of sitting-room, with a chair for every day in the year, a table for every month, and a waste of sideboard where a lonely China vase pines in a corner for its mate long departed, and will never make a match with the candlestick in the opposite corner if it live till Doomsday. The Dodo has nothing in the larder. Even now, I behold the Boots returning with my sole in a piece of paper; and with that portion of my dinner, the Boots, perceiving me at the blank bow window, slaps his leg as he comes across the road, pretending it is something else. The Dodo excludes the outer air. When I mount up to my bedroom, a smell of closeness and flue gets lazily up my nose like sleepy snuff. The loose little bits of carpet writhe under my tread, and take wormy shapes. I don't know the ridiculous man in the looking-glass, beyond having met him once or twice in a dish-cover - and I can never shave HIM to-morrow morning! The Dodo is narrow-minded as to towels; expects me to wash on a freemason's apron without the trimming: when I asked for soap, gives me a stony-hearted something white, with no more lather in it than the Elgin marbles. The Dodo has seen better days, and possesses interminable stables at the back - silent, grass-grown, broken-windowed, horseless.


As Bruce Hornsby (and his Range) once said, "Some things'll never change."

What the Dickens is that all about?

Sir BoD said:
I've done a fair bit of travelling in the past few years, and Stafford actually strikes me as more boring rather than odd.
Click to expand...

proactive said:
Yet here you are...
Click to expand...

Born and bred, my friend. Boring, but safe and familiar.

littleme said:
You think he's odd? We all love him!

The people of Stafford are a weird lot, no-one in Stafford seems to come from Stafford, & no-one talks to anyone....except on here...& me - I'll talk to anyone!
Click to expand...

Len's Lens said:
I went to a show at The Gatehouse once and when the act asked the front row where they came from, noone was from Stafford. Some were from Yorkshire and some from Birmingham and Wales. In fact, when the audience were asked to cheer if they came from Stafford, there was hardly a whimper heard!? There was a massive ROAR when they were asked to indicate whether they come from anywhere else apart from Stafford!!
Click to expand...

Sir BoD said:
Born and bred, my friend. Boring, but safe and familiar.
Click to expand...

proactive said:
Yet here you are...
Click to expand...

Actually, I want to requantify my 'boring' comment. It's not boring, it's more, well.....unremarkable.

Sir BoD said:
Actually, I want to requantify my 'boring' comment. It's not boring, it's more, well.....unremarkable.
Click to expand...

That may well be true, in general - but there are some odd things, as alluded to in the OP.

I find it odd that there is no pedestrian priority at Newport rd and Station Rd junction, I put this to David Kidney whilst he was doorstepping a good few years ago. Incredulously when I raised this at a local Tory gathering it was suggested I put my request in writing ! My response being "Fu#k Off"! probably did not further my case........

I was once stopped by two chaps trying to find how to get a bush to the Hospital - they were Iraqi, as it turned out.

They asked me where the Bus Station was, and, I believe, suspected that I was being evasive when I said that we hadn't got one and proceeded to take them to the back of M&S, where we "might find somebody that knew".

We were sent, by an old dear who seemed to know, to the Gatehouse to get the Hospital bus.

How long have you lived here?, they asked.
Since 1974.
And you don't know where the Bus Station is?
We really don't have one.

They trumped me with "We're from Mosul - we've been bombed for twenty years and we still have a Bus Station".

Gramaisc said:
I was once stopped by two chaps trying to find how to get a bush to the Hospital - ".
Click to expand...

But why did they they want to take a bush to the hospital?

Carole said:
But why did they they want to take a bush to the hospital?
Click to expand...

They had learned their English from early James Bond films.

Gramaisc said:
They had learned their English from early James Bond films.