Glam said:
So far I believe there's 1 set, a pedestrian crossing roughly level with the old railway bridge. I may be wrong, haven't been up to have a nose since they closed the road off.
@gilbert grape will probably know a lot more than I do....
Click to expand...

From one of the planning meetings I went to, there was just the one set like you say, near the old unused bridge. This is also sensor driven to help traffic flow as well as access and egress for Virginia Park and rugby club.

Anyone noticed that the egress of this road by Halfords is now a dual carriageway, yet the bus stop immediately after you turn left onto Stone Road has no layby? So the dual carriageway will be instantly disrupted if there's a bus?

I thought that there was a bus lay-by there.

Trumpet said:
I thought that there was a bus lay-by there.
Click to expand...

There was but I think it's been filled in to make the path wider.

That bus stop is hardly ever used and when it is buses aren't there for very long so I can't see it blocking traffic.

Although I use that stretch of road regularly I can't recall ever being delayed there by a bus, probably because of the lay-by.

Trumpet said:
Although I use that stretch of road regularly I can't recall ever being delayed there by a bus, probably because of the lay-by.
Click to expand...

This is a Stafford tradition - block a road at any opportunity that presents itself, however slim.

The bus stop at the hospital is truly special. It's able to completely block the outgoing vehicles with just the slightest oncoming traffic, when it could so easily be using the first few yards of the two lane section. True traffic management skill on view there.

There is now a bus stop just as you come over the bridge from Doxey. And another not long after the one by the Windmill. Something tells me the planners don't live in Stafford.

Glam said:
There is now a bus stop just as you come over the bridge from Doxey. And another not long after the one by the Windmill. Something tells me the planners don't live in Stafford.
Click to expand...

Stafford Station Gateway Masterplan
By Kerry AshdownStaffordPublished: Jul 13, 2021
Regeneration projects in Stafford will help unlock the town's potential and encourage people to live in the area, councillors have said. 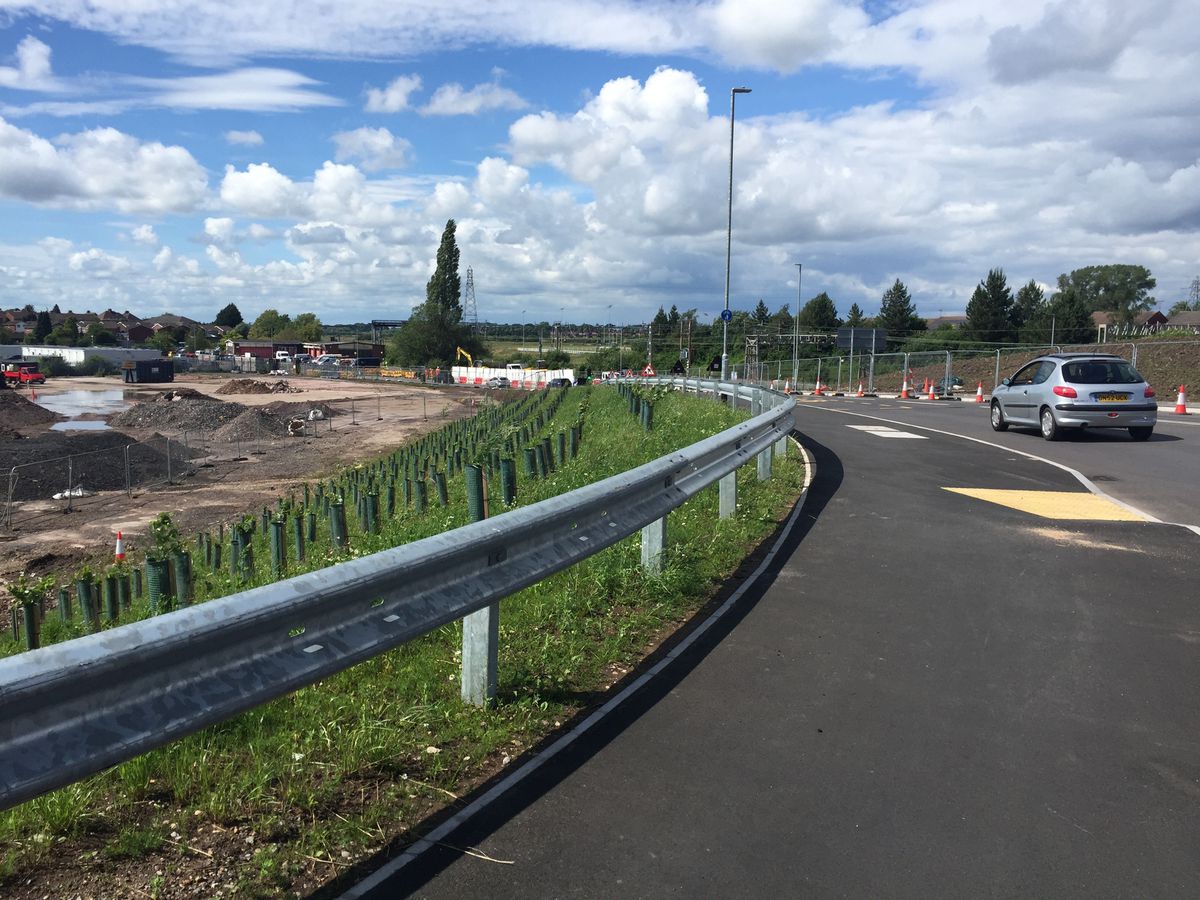 Land off newly-opened Unicorn Way which links Martin Drive And Doxey Road and could be used for housing development
The latest section of the Stafford Western Access Route, which crosses the railway, opened at the start of this month, providing a new link from Castlefields in the west to the town centre.

The aim of the new road is to relieve congestion in other parts of town, such as Newport Road and Station Road. But it is also unlocking access to land around the railway station area and opening the door to its regeneration in the years to come.

Stafford Borough Council and Staffordshire County Council are currently working on a number of major projects in the county town.

Around the same time the railway bridge reopened the county council welcomed the award of almost £4m from the National Lottery Heritage Fund to help develop the Staffordshire History Centre in Eastgate Street.

At the end of 2020 it was the borough council’s turn to celebrate as the Government revealed the authority had been successful in its bid for a share of Future High Streets funding to revamp Stafford town centre.

At this month’s cabinet meeting senior Stafford Borough Council members gave the green light for almost £20m to be spent on the Future High Streets scheme, which includes £14.3m Government funding, and for the next stage of the Stafford Station Gateway Masterplan to go ahead. 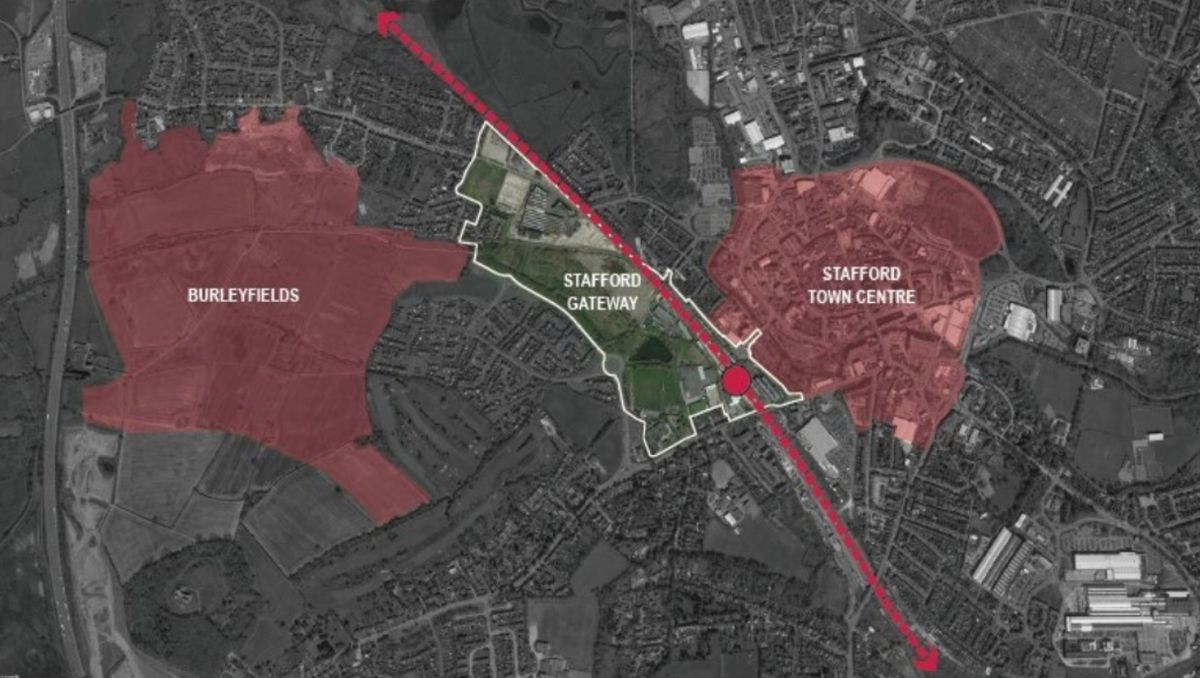 A map showing the Stafford Station Gateway Area
Michelle Smith, economic growth and strategic partnership manager at Stafford Borough Council, explained the link between the two major projects – and others in the town – following the meeting.

She said: “Stafford Station Gateway, Future High Streets, Staffordshire History Centre, the work the county council is doing in Eastgate Street and the Stafford Western Access Route all fit together in the story of Stafford when we’re doing funding bids. We’re not just talking about one bid, all the different projects are part of it.

“We want to give people reasons to come to Stafford not just for the day. We want them to be staying in Stafford.”

Stafford Station Gateway Masterplan aims to gain economic benefits for the town from its proposed link to the high speed rail line set to pass through the borough. This will see HS2-compatible trains switching from a junction of the high speed line at Handsacre to the West Coast Main Line, which passes through Stafford’s railway station.

Councils and community leaders in the area have voiced objections to the controversial HS2 project since it was announced several years ago that the second phase of the line would run through Staffordshire. They are now looking to monitor the impact of the scheme on communities as it gets under way and have vowed to get the best deal for residents.

Staffordshire County Council has also been working to acquire land around the station area that was previously home to Saint Gobain Abrasives. The manufacturer has relocated to Redhill Business Park to the north of Stafford and the former buildings on the edge of Doxey have now been cleared.

Miss Smith explained that the vacant land could be used for residential purposes. It is located close to the Burleyfields site where hundreds of new homes are currently being built as well as the former Castleworks, which is being developed by St Modwen into a residential area named Bagnall Meadows.

“The first phase of Burleyfields has seen 449 homes gain full planning permission and there will be up to 1,500 over 15 years”, she said.

“Part of the reason for the site being able to be developed is the road being put in to serve it. People will be able to walk from this side of town to the railway station.” Land between Castle Street and Castlefields that could be used for business development
Over the road from Bagnall Meadows, heading towards the railway station, is land used for business purposes. There is potential for even more business development in that section of the station gateway between Castle Street and existing enterprises on Newport Road, Miss Smith said, as well as reuse of the former Stafford Rugby Club site.

The club has moved to new grounds further north at Blackberry Lane, on the edge of the marshes. Back at Castlefields remnants of the former pitches and training fields can still be seen but last year it was announced the vacant land was earmarked for a mixed use development which could include a food retailer and hotel.

As new homes and businesses spring up around the station in the years to come residents and workers will be able to enjoy a more natural feature already there – a large pond between Castle Street and Castlefields.

Miss Smith said: “People already walk around there and we get a lot of fishermen. The natural resource creates a really nice focus around which the development will grow.”

While much of the detail of the Stafford Station Masterplan project remained in a confidential report at this month’s cabinet meeting residents will not have to wait too long for a public consultation.

Further details are due to be revealed in the coming months – and council leader Patrick Farrington described the scheme as “exciting” at this month’s cabinet meeting.

He said: “This is another superb example of how hard our officers are working and how we are working as an authority to deliver a massive plan. It revolves around Stafford Station and as we know the Stafford Station Access Route is almost coming to completion and has helped to unlock part of this scheme.

“This report in isolation does not really tell the whole story. It comes off the back of the £2.5m that has been spent right outside the station on Victoria Park. “

Councillor Carolyn Trowbridge, cabinet member for leisure and ward councillor for Rowley, where Burleyfields and Castlefields are located, said: “I’m more excited about it than the £20m for the town centre, which is absolutely brilliant.

“I love the whole aspect of what we are trying to deliver here. It’s bringing economic growth into Stafford.”

Councillor Jeremy Pert, cabinet member for community, said: “It’s only part of the picture. We’ve also got the investment in Stafford College coming through and the location of the gateway itself will provide some of the footfall that will sustain the high street going forwards.

“It will give it the future it really needs where the first investment will pay off. I welcome this.”
E

“Land off newly-opened Unicorn Way which links Martin DriveAnd Doxey Road and could be used for housing development”
Surely that was the whole idea of the road. Open up acres of prime development land. More housing equals more council tax to be squandered.
Surely no-one really believes the intention was to make things a little easier for motorists.

EasMid said:
“Land off newly-opened Unicorn Way which links Martin DriveAnd Doxey Road and could be used for housing development”
Surely that was the whole idea of the road. Open up acres of prime development land. More housing equals more council tax to be squandered.
Surely no-one really believes the intention was to make things a little easier for motorists.
Click to expand...

I'm pretty sure if you google it and bring up the original and even later proposals they promised this are would be a mix of housing and industry/retail so there were jobs included in the plan. Loads more houses and no more jobs makes as much sense loads more houses and less health services.

I have said elsewhere (Facebook) that I really don't want the rest of this road to open. Almost every evening there's someone driving round the new roundabout like he's Matt le Blanc going round the Cenotaph on Top Gear.
I'm not a nimby, knew the road was going be built at some point well before I even came to look at the house. But I am really getting fed up now.

Can see the first home we bought and my present one on there.

BobClay said:
Strange isn't it ? ... It's like the Universal never existed ...