Over the years I have modified around thirty of these (what I still think of as 'modern') taps.They have a completely unnecessary fault which manifests itself after a few years, usually. 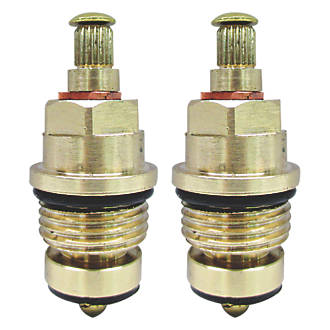 Unfortunately, I can't find a picture showing the internals, where the actual problem is, but the washer, visible at the bottom, is on a piece which is jacked up and down by a (left-hand) screw on the splined shaft that the handle turns. The rotation of the washer body is prevented by a hexagonal section which slides in a hexagonal hole in the outer body. For some reason, there is another (O-ring) seal, which slides up and down in a cylindrical section below the hexagonal bit, behind the mounting thread in the picture. Because of the dimensions chosen, this seal comes out of the cylinder (making me wonder why it's even there at all) and is supposed to be guided back in by a short chamfer at the bottom. All works OK when they're new, as there is grease about, but, especially with hot taps, the grease washes away over time and the chamfer is much too steep for the seal to ascend into, then the seal gets a bit chewed up by the effort taken to get the tap to open at all, making the situation worse - eventually, it may even become impossible to get even a trickle out, much less the full flow.

This seal is not subject to any real pressure, that is all handled by the 'real' washer at the bottom, it's only presumed purpose is to protect the grease in the threaded section and to stop any water exiting up the splined shaft, when the tap is open - but it doesn't keep the water out and the water doesn't flow up the splined shaft without the seal there. It might be intended to line the washer up accurately as it descends, but there doesn't seem to be a problem about that in reality and, after the washer has compressed a bit with use, the seal is out of the cylinder before the washer reaches the seat.

My technique is to remove this pointless seal and put the rest back. When I first did it, I did feel a bit "There must be a reason that it's there", but the first tap I did it to, in 1995, has worked perfectly since then, as have all the others, as far as I know.

I would even go as far as recommending removing it from a brand new tap.

Hot taps are far more susceptible to it, but cold taps are not immune.

Reminds of working on the engines of old Brit Bikes back in the day. They were fairly simple in design in that there was no overhead cam or chains, just pushrods jutting up into valve cups. (You needed a bit of dexterity to get the push rods seated into the cups on the rocker arm when rebuilding the engine.)
At the end of all this you'd find some small metal part left over and couldn't figure out where it had come from. So with a muffled cough, you kicked it under the bench, and if all went well, boasted to your mates you'd 'improved the design.'