A ‘tacky’ illuminated sign could be slapped onto the front of a landmark 17th century pub, under new plans. 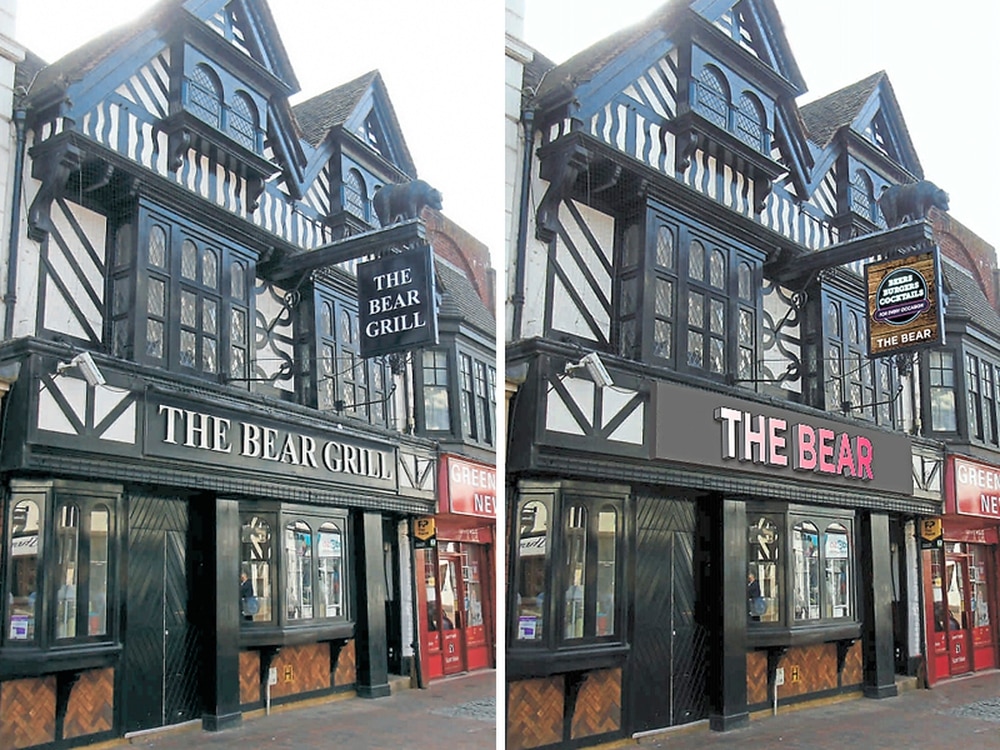 What the front of The Bear Grill looks like now and a mock-up of how new signage could look
The Bear Grill in Stafford shut its doors on May 6 after The Lewis Partnership, which had operated from the Grade II listed site for more than 15 years, pulled out.

Dating back to 1650, the Greengate Street building is owned by Marston’s and the lease has returned to the brewery.

Now, plans have been submitted to Stafford Borough Council to rebrand the restaurant and replace the main ‘The Bear Grill’ sign with ‘illuminated colour-changing LED letters’.

If given the go-ahead, it will be fixed white in the day and fade from white to pink, to red, to purple, and then to blue in the evening. 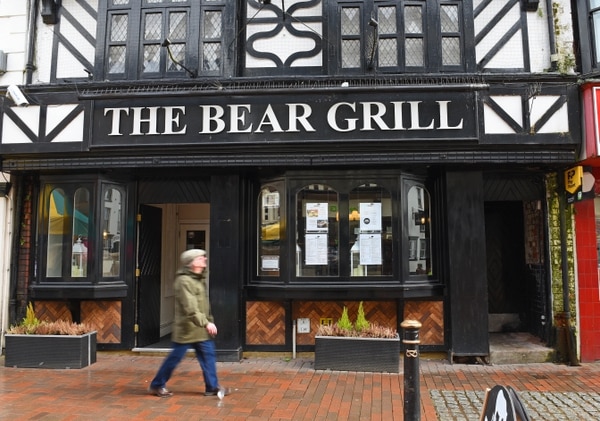 The building housing The Bear has been a pub since 1758
A traditional hanging sign will also be changed to read ‘Beers, Burgers, Cocktails – for every occasion’.

Councillor Chris Baron, who represents the town centre Forebridge ward and is a member of the planning committee, said: “It’s good to see it’s not going to be standing empty, but they’ve got to remember it’s a listed building.

“You can’t have modern stuff stuck on there. I shall definitely be looking at the plans and calling it in to the committee.

“Although I think it’s good that it’s going to be opened again – they have to be careful what they’re doing to a listed building.”

The developers insist that as part of the project, the setting of the building ‘will not be harmed in any way’.

A planning statement from Redditch-based Sign Specialists, says: “After recent consultations with both design consultants & our client Marston’s Plc Ltd we have agreed illumination proposal taking into careful consideration the style of the building, location of the property and how much of a visible impact this will incur on the surrounding area.

“All physical features and architectural detail will be maintained to justify its classification as a listed building.


“The building setting will not be harmed in any way as our proposal serves only to re-brand the current public house and has been for quite some time.”

Stafford Borough Council received the plans this week and a decision will be made in the near future.

A Stafford resident, who asked not to be named, said: “I can’t believe that any council would let this change take place.


“It looks cheap and tacky. The old signage was well known and fitted in with the building. This looks awful. What is happening to our town centre?”

The Lewis Partnership, which also runs The Swan across the street from The Bear Grill and The Moat House in Acton Trussell, said it was ‘saddened’ to be leaving the Bear in March.

About 25 years later, it became The White Bear, often referred to as The Bear, and in 1835 the building officially became know as The Bear Inn. No-one from Marston’s was available for comment.
F

This signage would be an excellent addition to the town centre.

However, could we get the bear statue on the top of the sign to at least revolve in time to the colour change effect.

The Lewis Partnership, which also runs The Swan across the street from The Bear Grill

My mates dad made the bear that is there now, after the original one was damaged (or something, can't remember it was so long ago in my teens)

Do you remember when his head fell off, I think it was in the 70s? The bear that is.

No the lewis partnership no longer lease the bear from marstons, awaiting new tennants

Feed The Goat said:
The Lewis Partnership, which also runs The Swan across the street from The Bear Grill

Feed The Goat said:
This signage would be an excellent addition to the town centre.
However, could we get the bear statue on the top of the sign to at least revolve in time to the colour change effect.
Presumably a Russian Anamatronic Dancing Bear is over budget, shame.
Click to expand...

How about a large gold cage with a disco ball on top and then inside Marwood in a gold bikini as staffords resident gogo dancer !

joshua said:
How about a large gold cage with a disco ball on top and then inside Marwood in a gold bikini as staffords resident gogo dancer !
Click to expand...

Bit over the top int it?
The cage I mean

Glam said:
Bit over the top int it?
The cage I mean

Theres cages in the Butlers Bell...

Glam said:
Bit over the top int it?
The cage I mean

That was to hold my daughter in when she worked there

I prefer modern architecture to old stuff but even I can identify that as being absolutely hideous.

Feed The Goat said:
The Lewis Partnership, which also runs The Swan across the street from The Bear Grill

industryarch said:
No the lewis partnership no longer lease the bear from marstons, awaiting new tennants
Click to expand...

I think the point our Right Honourable Member was making was that the Lewis Partnership no longer runs The Swan either.

Looks hideous to me.

To be fair, the shop-front next-door could fit in better, too.

And that's been like that for a long time.

Gramaisc said:
To be fair, the shop-front next-door could fit in better, too.

I think just removing the 3D effect from the text may well be sufficient.

Probably needs to protrude a little to fit the lighting in, as the front is likely listed.

Gareth said:
The Lewis Partnership has today announced that from 6th May 2018 The Bear Grill, Stafford will no longer be a member of their restaurant and hotel portfolio.

The Bear Grill joined the Staffordshire based hospitality company in 2003 and saw it transform from a town centre public house in need of a little TLC, into a thriving gourmet burger restaurant and popular family dining destination, so todays announcement that the partnership are letting The Bear go may come as a surprise to many.

The Bear Grill is owned by Marston’s brewery and is currently leased to The Lewis Partnership. The aim of the partnership for the future is to grow their independently owned business portfolio with a focus on destination dining village pubs – similar to their newest property acquisitions The Bank House, Hixon and The Red Lion, Bradley.

Chris Lewis, Managing Partner of the Lewis Partnership said “A break opportunity in the lease agreement of The Bear Grill led us to consider long and hard the portfolio of The Lewis Partnership and our visions for its future growth. We came to the decision, as a family, that letting The Bear go back to Marston’s for re-leasing would enable us to concentrate on the core strengths of the partnership.

We will be saddened to close the doors of The Bear for the last time on Saturday 5th May but we sincerely hope that we have in some way contributed to the history and legacy of this iconic landmark on Stafford’s high street”
Click to expand...

In other news, bear takes a dump in the woods.