As I am soon to be a resident of the village (fingers crossed) I wondered if anyone has ever been yo the pub and has any reviews?

So they can't count them?

Lucy said:
As I am soon to be a resident of the village (fingers crossed) I wondered if anyone has ever been yo the pub and has any reviews?
Click to expand...

No. Although I could swear I remember an unsatisfactory date which ended up in a cider bar, above a pub somewhere in Church Eaton. It definitely wasn't The Royal Oak and I may have suppressed the memory. I seem to recall a disagreement about hedgehogs, which resulted in me walking home. If it is of any interest, the scarecrow festival in Church Eaton is amazing. If you are to be accepted by your new neighbours, I would start planning your contribution now. A mere stick-and-straw job will not do. Also, there is a dog club in the village.

This a recent winner of the All-Ireland Scarecrow Championship.

Wonderful though that one is, I am not sure it would help Lucy strike the right tone with her new neighbours? They did have a brilliant drunk scarecrow, the year before last, though. He was collapsed on a bench, still clutching a bottle of beer. At least...I hope it was a scarecrow. If it was one of the Royal Oak regulars, perhaps it is not too late for Lucy to change her mind?

Perhaps a little more decorous for the first attempt..? 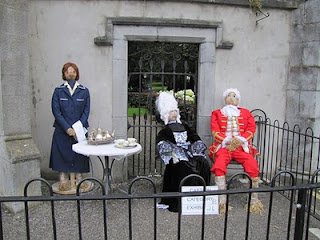 That's much more like it. Lucy is going to be terribly grateful for all our help. For background, if she wants to give brief talks about her scarecrows, I can confirm that Lord Ashcroft is a 'Belonger' of the Turks & Caicos Islands. In fact, she might want to include that information on the noticeboard.

Lucy is always grateful for our help - particularly on non-food issues. I can find little reference to this Royal Oak on the Forum - I thought there was, but it was the Anchor at High Offley that I was remembering...

There was another pub in the village, the Swan, which closed around 1993 but I'm not sure it was ever strong on cider FlossieToo. Could it have been the nearby Fox at Marston which closed around 2003 and whci stocked a few ciders at one time I seem to remember

Yes, the house we're going for is near The Swan, it looks a lovely building, shame it closed. Think we might go for a visit to the pub, I don't want to fall out with the locals before we've moved though.

I am of course grateful for your help

I have, in the past, spent many an evening in the pub there, and i too would recomend the scarecrow festival (although I dont believe they did one last year) they have a coffee shop in the village hall on a friday morning i think. lovely village. not eaten in the pub so cant comment on food, heard its ok, did hear a lot of locals were heading to nearby gnosal for a pint? The pub was up for sale not sure if it sold or got taken off the market?
Village has a strong community spirit. I would love to live there.

The pub is owned by the community, the vendors own shares, I am yet to ascertain if they are included within the sale or not.

yes its community owned, was the best way to keep the pub in the village, i dont know how it worked when it was on the market, whether the present owner was just selling his share and the villagers held onto theres? but anyway it looks like they have taken it back off the market now. They used to have great comedy nights in there when ray an australian comedian took it over for a while in early 2000's, Jimmy carr and some other famous folk (whos names i cant dig out from my brain fog) came in to put on comedy shows, often on their way to the Edinburgh comedy festival, very very good nights. watch out for the harvest auction, have seen the pickled onions go for hundreds!!

peggy said:
watch out for the harvest auction, have seen the pickled onions go for hundreds!!
Click to expand...

I'm not implying anything.... - http://www.dailymail.co.uk/news/art...uggles-4-5m-drugs-pickled-onion-shipment.html ..

I went before it was turned into a balti house and it was depressing, now, it is fantastic.

I went before it was turned into a balti house and it was depressing, now, it is fantastic.
Click to expand...

The Royal Oak at Church Eaton was also an Indian for a while?

I dont remember it being a balti house. must have missed that.

I'm suspecting that it's just a bit of confusion - all these places out in Yokelsville just look the same..

No they bloody don't. Oh, except Noah could be correct. I might have got Marston and Church Eaton confused. I know it was a very long walk home to Stafford via High Dudgeon. It was one of those dates you regret ten minutes in but instead of going home to finish your book, you have to keep making conversation. He definitely took me to a pub round there which had a separate cider bar upstairs.

The Vaughan Arms at Lapley used to do a mean balti, but it wasn't a balti house, did everything from fish and chips to game in red wine sauce. It has been closed for 6 or 7 years now, still empty and several applications for change of use have been refused. It was the two storey white & black version of the indistinguishable Yokelsville pubs. Maybe we should start a Memories of Pubs thread
You must log in or register to reply here.
Share:
Facebook Twitter Reddit Pinterest Tumblr WhatsApp Email Share Link
Top