doubt it'll be there long but aint it funny

James Coleman of Bristol, England became the "laughing stock of the office" after he got a black eye while using Twitter on the go. His humiliation could get so much worse than that. Coleman's story illustrates tidily what so many people hate about the microblogging service: Narcissistically documenting one's life all too often interferes with leading said life.

In Coleman's case, reality literally smacked him upside the head. He was jogging to work and tweeting on his BlackBerry when he cracked his skull against a low-hanging branch, according to the Daily Telegraph.
Click to expand...

In any case, it's a first: Police in Long Island, New York, have arrested a man for not using Twitter.

Someone named Justin Bieber, who apparently is a teenage singer, was supposed to appear at the Roosevelt Field mall on Friday, but stayed away because the crowd had become too unruly. Police asked a record label executive to help disperse the horde using the messaging service, and claim he didn't cooperate.
Click to expand...

Police in Long Island, New York, have arrested a man for not using Twitter

Staff member
We initially set-up @staffordforum purely as a way to communicate with you lovely people in the event of unexpected downtime, but now it has become such a pervasive part of today's online culture, I thought maybe we should utilise it a bit more. Therefore, time allowing, I will endeavour to tweet a link to "Thread of the Day" or similar, to keep us in the "tweet-loop".

John Marwood, you have the dubious pleasure of today's tweeted Thread Of The Day!

Any other suggestions welcome.

The thread of the day is good - it made me log back in and spend my weekend catching up on all the Stafford news!

tijuanalady said:
The thread of the day is good - it made me log back in and spend my weekend catching up on all the Stafford news!
Click to expand...

yeah, i don't log-on here as much as i'd like to these days, but i've always got twitter in the background so if i see the forum appear it does serve as a reminder..

The Twitterati might be interested to have World War Two replayed to them on a daily basis for the next six years - http://www.telegraph.co.uk/technology/twitter/8877167/Six-year-project-to-tweet-the-Second-World-War.html - a bit like All Our Yesterdays on ITV in the '60s with Brian Inglis.

I knock about as both @robhalden and @juicecomedy - although the robhalden account gets a bit neglected. I also try and update @joxerbradys as often as I can as well.

What about the rest of you?

I operate my own personal account (@citricsquid) and one for work (@redstonewire).

I'm over there as @LizzumsBB. I update twitter a LOT though. Having a mobile app probably doesn't help a whole lot with my obsession!

I forget I have twitter, I update on average once every two months and it normally consists of "I just remembered I have twitter again".

Spouting nonsense since the day I learned to talk

I've never looked at it once.

I'm neither proud nor the opposite of proud to have done, or not done, so.

I'm neither proud nor the opposite of proud to have done, or not done, so.

I tweeted once, I didn't like it so I didn't do it again.

But I still feel that I may be missing stuff! 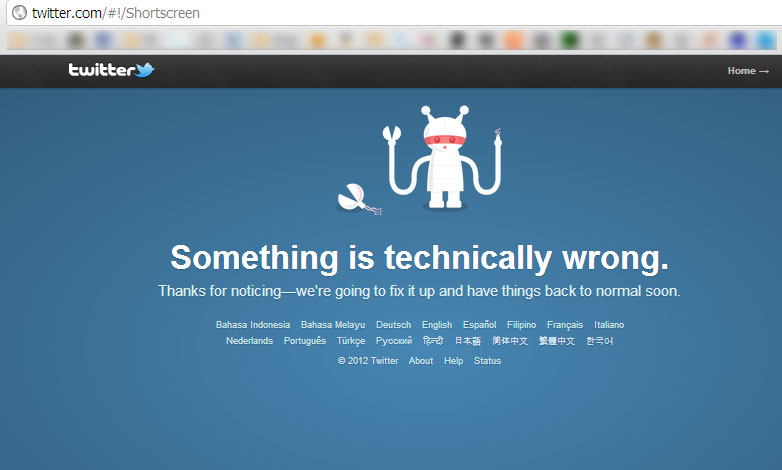