What book are we reading at the moment?

PeterD said:
This week though I have been in Norfolk and sat down with a book I have had for over a year, The Moon’s A Balloon by David Niven.
Click to expand...

I first read that book about 30 years ago and remember thoroughly enjoying it.
Husband is still hanging on to his mothers copy from 1973, signed by Mr Niven himself. 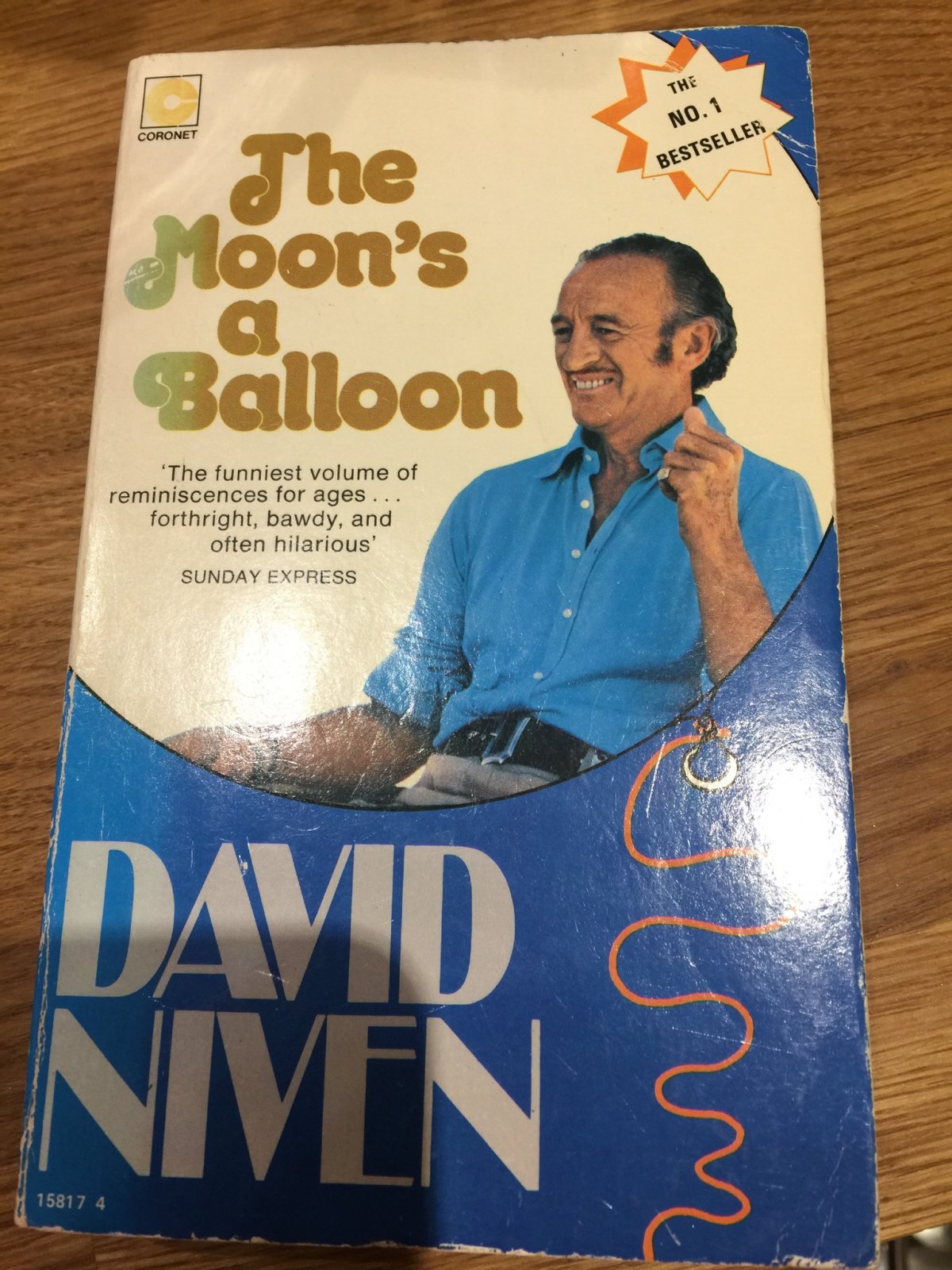 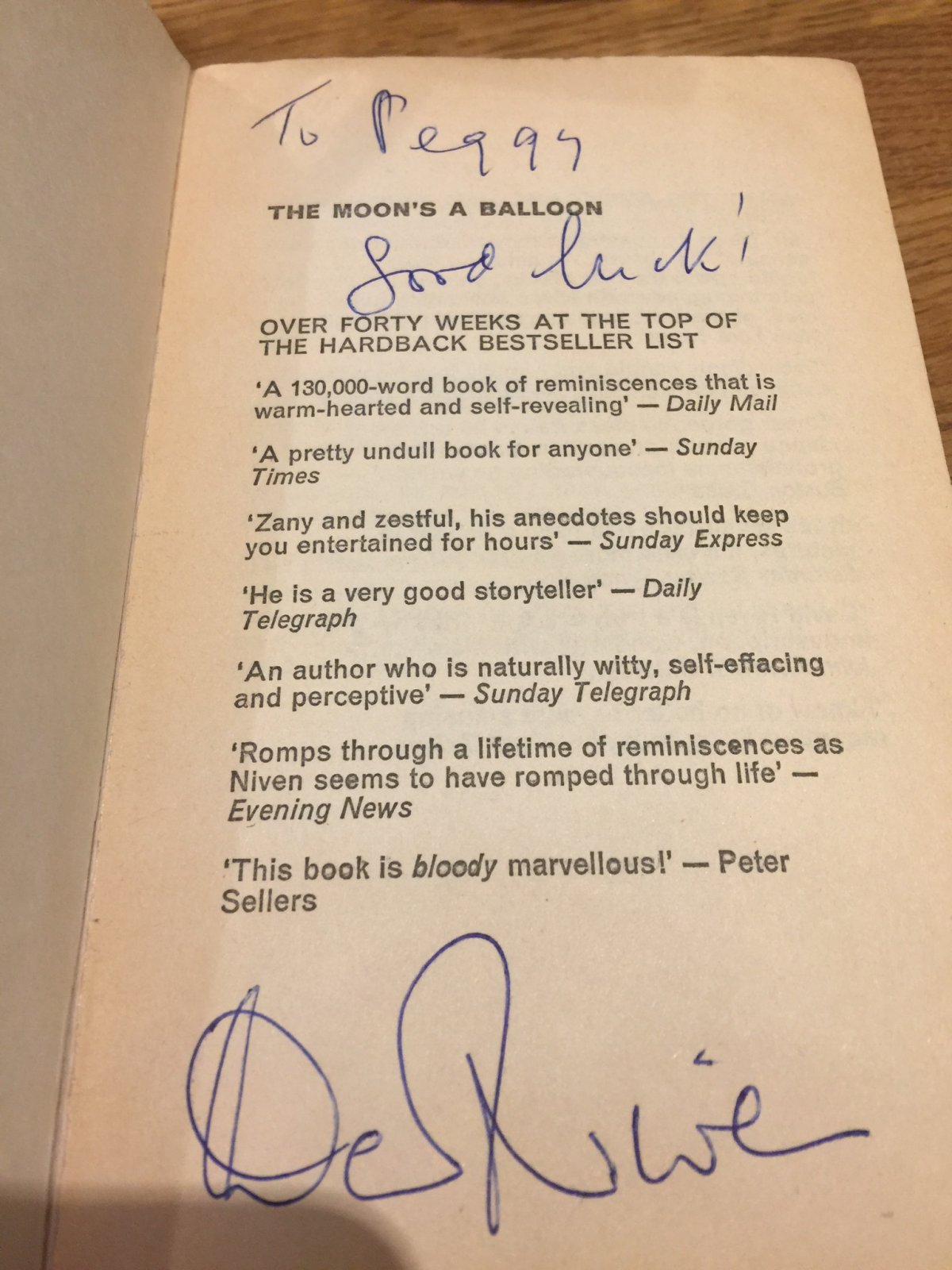 Carole said:
Husband is still hanging on to his mothers copy from 1973, signed by Mr Niven himself.
Click to expand...

I was once flicking through a book of aircraft pictures in Oxfam, when I noticed that one of the pictures had been autographed. As with many "regular signers", it wasn't fully legible, but I had a good idea who it was likely to be and so I bought it on spec.

I was later able to find a specimen of the suspect's signature online and that, with the fact that it was a Lancaster picture that was signed, confirmed that it was, indeed, Leonard Cheshire.

Some months ago Amazon offered the entire 'Dune' saga (six books I think) from just a few quid on Kindle. It seemed a reasonable deal and although I'd already read the first book: 'Dune' written by Frank Herbert and published in 1965 for some reason I never read any sequel after 'Dune Messiah.' (Book 2.)
I've just started on the entire saga so I'm going to be clumping through that for a while. SciFi is not everybody's cup of tea I know, but I'd say this story is more Tolkienian than SciFi. It was filmed back in the 80's by David Lynch (for which I would gladly march that prat down the working alleyway to airlock 13 and PSSSST !! POP !! him out into the abyss. He chose to rewrite the story ... bit like painting a moustache on the Mona Lisa.)
A new film of the original book is due out soon, directed by Denis Villeneuve, which looks more promising. He's doing it in two parts, as it's a large book with an enormous scope.

Think 10,000 years into the future where an entire Galactic Empire depends on the destiny of one planet: Dune.

"The Black Sun" by Owen Matthews. A murder mystery set in the 'Bomb Town' in Northern Russia in 1961 where they are nearing completion and about to detonate the largest thermonuclear device ever built (it was later named by the West as the Tsar Bomb.)
A clever mix of historical fact and fiction about a young KGB officer being sent up to the town to investigate the murder. I've read myself that Khrushchev wanted this bomb to have a yield of 100 megatons, but the designer Sakharov, who forms the basis of one of the characters in this book refused, fearing such a blast could effect the entire planet. The eventual yield was estimated at 56 megatons. There are some pretty terrifying facts in the addendum to the novel about the detonation itself.
Last edited: Dec 20, 2020

I've read 2 really good books already this year; How to Stop Time by Matt Haig and Autumn by Ali Smith. Both recommended.

I've also just finished a brilliant Val McDermid for those of you who like thrillers, the first Kate Pirie one I've read.

Just finished reading The Nanny, by Gilly Macmillan. Actually only took a day, enjoyed it so much I couldn't put it down.
Bit of a twist at the end.

Half way through Where The Crawdads Sing. Brilliant.

Im reading The Handmaids Tale, I’m about halfway through it when hubby decided he wanted to watch the series (I’ve already watched it) so I’m finding it really confusing knowing what’s going to happen whilst simultaneously reading and watching out of sync because the program isn’t all in the same order as the book. I’m taking a break from the book and will finish the last quarter and start on the second book after rewatching.

Bob said:
Im reading The Handmaids Tale, I’m about halfway through it when hubby decided he wanted to watch the series (I’ve already watched it) so I’m finding it really confusing knowing what’s going to happen whilst simultaneously reading and watching out of sync because the program isn’t all in the same order as the book. I’m taking a break from the book and will finish the last quarter and start on the second book after rewatching.
Click to expand...

I haven't watched the show yet but I read the book so long ago I actually can't remember how it ends so that will be a treat! XD

Currently reading book 8 of the series that 'The Expanse' based on and they have all been really good, better than the show I'd say but that's often the case when the show is going up against what's in your head. I'll finish it tomorrow and then there's just the 9th and final book out this year, will be sad when it's all over!

Also started reading 'Behind Her Eyes' today after enjoying the series.

I first read it when I was a kid, it was published in the mid fifties. I've read it many times and consider it to be one of the greatest SciFi novels ever written. When it was first published in the UK, it was titled Tiger Tiger. It was not uncommon to rename books and films for perceived changes in viewing on either side of the pond. I think the original title was better, but I understand the change as at the head of the book Alfred Bester quoted a verse from William Blake:

Tyger Tyger, burning bright,
In the forests of the night;
What immortal hand or eye,
Could frame thy fearful symmetry?

Which does describe Gully Foyle, the central character of the story, pretty much on the knuckle. But Gully has his own personal little poem:

Gully Foyle is my name
And Terra is my nation.
Deep space is my dwelling place
And death's my destination.

.... but by the end of the book the final line of his little poem becomes: The Stars my destination.

It's never been filmed, I can't think why. It would make a cracking movie in the hands of the right director. (David Lynch need not apply.)

There is a prologue which sets the scene and state of the human race a few centuries down the line, and then you're hit with a great opening line:

"He was one hundred and seventy days dying, and not yet dead."

Haha a podcast I listen to (Elis and John) used to have a segment where they'd read from that, it's absolutely ridiculous and hilarious.

You can listen to those readings here: https://www.mixcloud.com/noeltyrrel...from-tony-blackburns-poptastic-autobiography/

Apparently the book was a reference point for the fictional Alan Partridge biography, too.
Last edited: Mar 18, 2021

Over the last month I’ve read Elly Griffiths The Crossing Places and The Janus Stone, which are a series of murder mystery books set in Norfolk, thoroughly enjoying the series.
Also Dead Souls by Angela Marsons, murder mystery set in the West Midlands.

But my favourite this month is The Beekeeper of Aleppo about the plight of a family fleeing Aleppo during the Syrian Civil War.
It really moved me.

I read The Stranger Diaries by Elly Griffiths a while back, really enjoyed it.

I will be in the charity shops as soon as I possibly can after they open, my to read pile is down to the dregs of the books I've ignored for at least 5 years.

Lucy said:
I read The Stranger Diaries by Elly Griffiths a while back, really enjoyed it.

I will be in the charity shops as soon as I possibly can after they open, my to read pile is down to the dregs of the books I've ignored for at least 5 years.
Click to expand...

I’ve got that one in my bookcase but I’m reading them in order and I think that’s book 10 or 11 so it might be a while before I get round to that one.

Lucy said:
I read The Stranger Diaries by Elly Griffiths a while back, really enjoyed it.
.
Click to expand...

Carole said:
I’ve got that one in my bookcase but I’m reading them in order and I think that’s book 10 or 11 so it might be a while before I get round to that one.
Click to expand...

I’ve just realised that The Stranger Diaries is a standalone novel and not part of the Ruth Galloway series so I could get stuck into that anytime.

Read a lot of non-fiction books recently, including a mind boggling book about Neutrinos. Still haven't quite got my head around it. (Put it this way, since I started typing this post, literally billions of Neutrinos generated in the heart of the Sun have passed through my keyboard !!!

)
So for a break I've decided to reread some more of my favourite books. Starting with the first of the Culture series of SciFi novels by Ian M. Banks, Consider Phlebus.
Ian M. Banks was a Scottish writer, sadly no longer with us as he died fairly young. He wrote General Fiction under the name of Ian Banks, (e.g. The Wasp Factory) and Science Fiction under the name of Ian M. Banks. His 'Culture' books are much praised and reveal a phenomenal imagination. 'Consider Phlebus' is something of a space opera, and I did hear rumours there might be a film or TV series, but nothing since.