Having recently moved house to somewhere with a large blank canvas of a garden I'm fining myself in need of some inspiration.

This weekend has been spent fencing off a dog, horse and vehicle free area for the kids to play, then an area off this for 'my garden' I'm planning on a small patio outside the living room French doors and then I want a gravel footpath through the middle and loads and loads of flowers, this area will have sun all day and I'm going for a real cottage garden theme, some raised beds and some low level areas, Grecian urns, Belfast sinks and old farm implements thrown in for good measure placed sporadically.

I know what I want but what I don't know is my daffodil from my buddleia - ok so I know those two but on the green fingered scale I'm a purple. I want traditional but interesting, a load of rosebushes don't do it for me. I want hardy annuals with spread, different colours, different heights and I want lots of them, I've got quite a big area and I want it full.

Ideas of what I should be buying would be greatly appreciated.

Places like this - http://www.plants4life.co.uk/index.php/about-us - are often prepared to give genuine advice.

Be prepared for it to be not totally full the first year - or overfull thereafter...

Look at gardens you like and ask the owners.

Places like - http://dorothyclivegarden.co.uk/ - will often have labels on specimens.

Get to know the 'older members' of the comunity. Quite often you'll find they are overflowing with knowledge of plants. (Don't ask me, I know sod all, even tho my dad worked at Boultons nurseries at Moddershall for yrs). And, if you're lucky, they will be more than willing to let you have cuttings or seeds off plants and flowers.

Can anyone recommend slug proof plants please? I have a lovely flower area at my allotment but it suffers badly with slugs and snails. The only plants that survive year on year are Scabious, geraniums, and those big poppies with hairy leaves. I have some space to fill so would love some recommendations for plants that won't disappear overnight!!? if they are good for bees and butterfiles that would be a bonus

Put beer out for the slugs and snails. They drink it, get tipsy and fall in.

Malcolm said:
Put beer out for the slugs and snails. They drink it, get tipsy and fall in.
Click to expand...

Cheers, I tried that, it does work, but the sheer scale of the allotment makes it a very expensive way of saving my plants!

Strategically placed dishwasher salt on the perimeter around the plants will help.

Lavender. It's the only plant that seems to escape the slugs in my garden. It also seems to attract the bees and butterflies, the scent is gorgeous, and it's pretty easy to keep alive for years. Bonus being you can make lavender sugar, etc.

kyoto49 said:
Cheers, I tried that, it does work, but the sheer scale of the allotment makes it a very expensive way of saving my plants!
Click to expand...

Coffee grounds are supposed to work scattered around the plants, they can be picked up in bags for FREE from *Starbucks.....


*Other coffee shops may also give them away ...

littleme said:
Coffee grounds are supposed to work scattered around the plants, they can be picked up in bags for FREE from *Starbucks.....


*Other coffee shops may also give them away ...
Click to expand...

. Ta for the suggestion though.

kyoto49 said:
I've also heard this but our slugs and snails must be made of sterner stuff as the coffee grounds that are free at our site the slugs seemed to like

They didnt work very well in our garden either! Copper tape around pots seems to work quite well....

So one year on and I have done very little with above mentioned blank canvas.

There's so much I want to do and I'm lost as to where to throw the time (and money) into to start.

Anyone know a good garden designer?

We used Garden Angels in the summer, they planted everything we needed days before our wedding and the one leading it all even lent us some extras for a week to spruce up the garden during the reception. Cannot recommend them enough. We've got them on standing order for 7 visits a year now to keep things in order as everything we look after dies - we have a pot of grass in the kitchen for the cat to nibble on and even that's dying.

Bob said:
Kitchen Garden - We're a long way from River Cottage but....I have a plan, more veg beds and a bigger greenhouse ordered we even a scarecrow. I have enough seeds to feed a small village, I know how not to plant tomatoes and a better understanding of succession planting. Hopefully this with be a significant improvement on last year.
Click to expand...

A greenhouse can never be too big. The bigger it is, apart from more space (obviously), then temperature variations will be much less of an issue, both too high and too low. Automated window openers are close to essential, unless 2021 is another "never leave the premises" year...

When I was bothered enough to grow some of my own, I started a few plants from seed about once a week and stuck them in randomly around the borders - it worked well for lettuces, radishes, etc., - you don't need a huge crop in one go, just the odd one, now and then.

If you are burning wood, I can recommend using spare space (?) in the greenhouse to 'kiln' some wood - apart from wood which will almost catch fire by just banging it together, you also add mass to the interior, further smoothing out the temperature variations.

It is my belief that, subject to the exigencies of the site layout, it is best to have a greenhouse arranged with the long axis running north-south - thus presenting a bigger area to the Sun early and late, plus a smaller area to the midday Sun.

A few spare panes of glass can be handy...

It is rather easier to run water and electricity in before you actually build the greenhouse, if you intend to do that.

If the impending greenhouse is a proprietary aluminium one, and you are not a family of midgets, then it is well worth considering mounting it on a base of concrete blocks. The extra headroom will be most welcome to all normal humans - and the additional mass will also help, structurally and thermally.

Aluminium greenhouses are essentially a construction consisting of rectangular frames. They have a small amount of triangulation, but it may not be enough for a windy location. 'Fretting' of the glass is a major cause of breakages. It is easy enough to add to the stiffening by adding extra triangles. 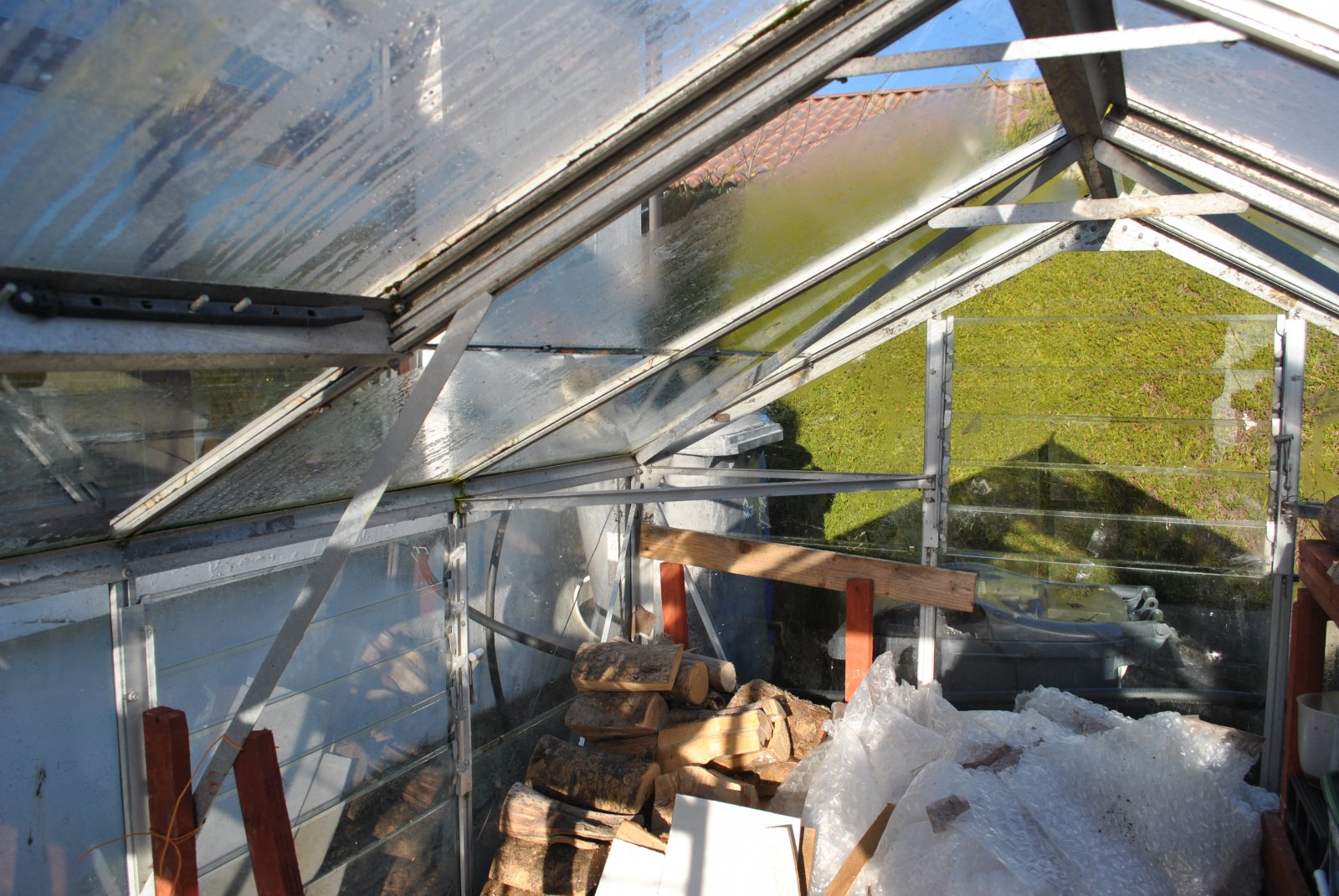 The three thin struts radiating from the far corner are the provided stiffening bars. The thicker angles seen as well are additional struts added over the years, resulting in no panes being replaced for about five years now. Also, the diagonal across the corner provides support for a shelf in the 'dead space', if desired.

This greenhouse is also 'attached' to the shed on the left and is further attached, by struts, to another greenhouse to the right, thus stiffening the whole arrangement.

It is often possible to mount the additional struts using existing bolts - and it is a good idea to pop a bit of Vaseline on the bolts when the structure is first assembled, as the bolts are aluminium, for anti-corrosion reasons, and thus very liable to shear, if they seize, even a little bit.

Manually-operated louvre windows are fitted in the three walls without a door in - worth doing, if you find them in a cheap situation - boot sales and B&Q sell-offs have provided these at a reasonable price. The louvre system requires very careful fitting, to ensure that slats don't slide out unintentionally. It is 'possible' to automate the louvre windows, but I'm not convinced that it is a worthwhile improvement, if you have 'real' windows that are automated anyway.

Generally, each pane is held in with four W-clips and two Z-clips - it's worth getting a few spares and increasing this to 6 x W and 3 x Z - Wilkinson's usually have packets of each - or eBay. The Z-clips sometimes display a tendency to creep to one end, but can usually be slid back into the right place easily enough.

If you do need to put a bolt in after assembly, then you can get ones that will be able to be placed in the 'front' of the slot, rather than slid in from the end, as the ones supplied with the kit will be. They are often described as 'cropped head' - as seen on the left below. I found the opening windows to be particularly susceptible to cracking the glass panes, they will flex a lot, if they open on a windy day, only being really supported along one edge, and have therefore replaced those ones with plastic items, with no further losses.

In addition to the above excellent advice I would add, if you are able, keep a portion of the interior free from any shelving etc. Double dug with manure you can get amazing crops of tomatoes, cucumbers etc planted straight into the ground. When I used a greenhouse years ago I never bothered with 'stopping' the plants, let them go to the roof. Kept well watered they did exceptionally well.

Trumpet said:
In addition to the above excellent advice I would add, if you are able, keep a portion of the interior free from any shelving etc. Double dug with manure you can get amazing crops of tomatoes, cucumbers etc planted straight into the ground. When I used a greenhouse years ago I never bothered with 'stopping' the plants, let them go to the roof. Kept well watered they did exceptionally well.
Click to expand...

You can, of course, also have removable shelving, so you can put it back for the winter/spring operations.

I’m reading about companion planting at the moment, everything time I learn something new I highlight 10 things that I ought to know but don’t. I think I might need to look for a less complicated hobby.

I think you can take gardening to whatever extreme you gave time for. I never companion plant, and probably spend an hour or so a week on the veg patches. Our neighbours however spend every waking hour tending their garden.
You must log in or register to reply here.
Share:
Facebook Twitter Reddit Pinterest Tumblr WhatsApp Email Share Link
Top