Media and comms person needed to replace stalwart. Must be patient, capable and have the ability to put lots of time in and work for free.

Splendid start - against one of the league favourites, a 3-1 win at home beating Morpeth Town.
We now follow that up with 2 more home games, with Warrington on Tuesday night and Radcliffe on Saturday.
Match Tickets | Stafford Rangers FC Web (ktckts.com)

Splendid start indeed!! 3.1 win against one of the more fancied teams in the league, who apparently have loads of money! However this is the Boro', and it seemed to be going swimmingly at half time. 1.0 up, then their captain got sent for an early bath 5 minutes after the break, (think its showers now old man, get with the times and give credit to the development work done recently!

Well after watching the mighty Boro for nearly 50 years, recent experience has left me cautious regarding our immediate prospects.

My son 25, has seen few of the glory days that I have had the good fortune to witness, in fact far too much of the opposite! So our observations, when they equalised and looked like scoring another, were not for family listening. But all was well, Boro scored two in the last few minutes of the game, and the last one was buried by debutante Luca Navarro, who had inexplicably blasted a similar chance over the Shed end from close range!

Onward and upward, a home toughy tonight against Warrington and another home game on Saturday vs Radcliffe. This last match will be interesting, Radcliffe recently not a strong outfit, and the team of two of the Boro's new signings! Luca scored as mentioned earlier, and displayed some good touches, & Luis Morrison- Derbyshire. He is an interesting character, having been a 'contestant' in Love Island in 2015. Is he a hunk? Couldn't possibly say, but as a female Boro' fan said to me before the game, "as long as he does a job for us, he'll do for me!" His Instagram as he came off, decide for yourself, answers on a postcard:- https://www.facebook.com/859170547/videos/pcb.2140030649487589/388551182839154
Last edited: Aug 17, 2021

0-1 tonight, not much between either side. Did think that in the past 3 or 4 seasons the Warrington side I saw tonight would have stuffed the boro' by 3 or 4 . A goalie on the bench is must have........

basil said:
0-1 tonight, not much between either side. Did think that in the past 3 or 4 seasons the Warrington side I saw tonight would have stuffed the boro' by 3 or 4 . A goalie on the bench is must have........
Click to expand...

Perhaps they could adopt a Canadian V formation?

Putting things back in perspective - I've just seen the news that Gerry Jones has passed away.
Aged 75, Gerry was part of our glory years and played for Boro between 1967 and 1974 and was an almost ever present at our home games, sat in the stand with a number of well known faces from back in the day. He was well known in the town and had his hairdressing business here too.
R.I.P Gerry
Last edited: Aug 18, 2021

Hi .Yes so sad a true Rangers legend and all round nice bloke.
It wasnt his dad who kept the rifleman ,it was Roger Jones dad .

Jackel said:
Hi .Yes so sad a true Rangers legend and all round nice bloke.
It wasnt his dad who kept the rifleman ,it was Roger Jones dad .
Click to expand...

Ah yes I stand corrected, Rogers's dad was called Sis if my memory serves me ......
M

We deserved atleast a point last night, however I was very encouraged by the performance. Looking forward to Saturday now.

Should be an interesting fixture this August Bank Holiday at 3pm, Marston Road.
With The Boro losing one of our first five games and looking better than we have for about 4 years, we take on league leaders Buxton. They are highly fancied, we are highly competitive.
Can we keep the points ticking over and get our highest gate yet?
Tickets available online or pay on the gate. https://staffordrangersfc.ktckts.com/event/srf2122h03/stafford-rangers-v-buxton

@markpa12003 and a group of volunteers have set off on the path to yet another building project.
In 2018 a few of us including myself and Mark brought the Shed End back to Marston Road. This was something that happened despite loads of people doubting us, our ability and the funding needed - BUT WE DID IT!!
This time the lads are looking to get terracing installed at the social club end of the ground before installing a cantilever cover over the top of it.

SO - Stafford people!!
Are there any local, or national, businesses that would be willing to tender for the job to get phase 1 done - the terracing.
Artists impression of new install the whole width of the club. 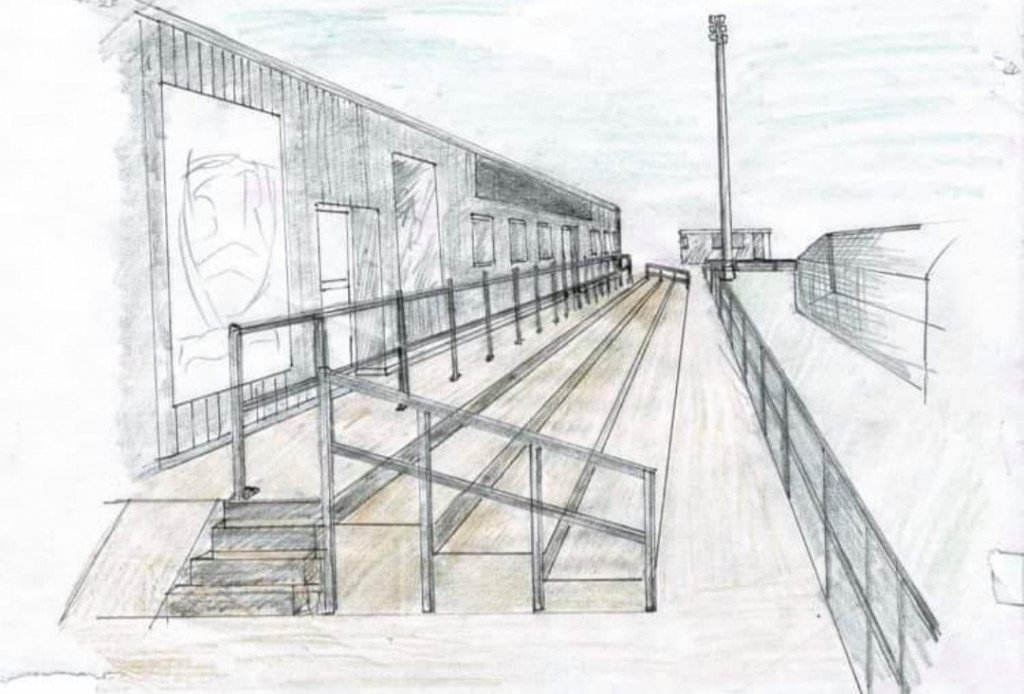 Stafford Town 0 Stafford Rangers 1 in tonight's senior cup tie
So much better than a 0-13 pre-season event .....

The next thing between the Sow at Riverway, flying directly south south east are the Urals, apart from of course the floodlights at WBA
M

Great crowd last night and friendly atmosphere and it was an entertaining game.

I expected my team, Stafford Rangers, to win comfortably but Town played very well and for large parts Rangers didn't.

Needed a good goal late in the game to settle the tie. We will need to be a lot better on Saturday against Matlock.

markpa12003 said:
Needed a good goal late in the game to settle the tie. We will need to be a lot better on Saturday against Matlock.
Click to expand...

Absolutely Mark! Tough one, and as I am in Buxton for the weekend at an Exmas do with friends I will be going! John and I will be escaping from the ladies planned afternoon of shopping! We escaped in 2013 when we went to Hull. We took the journey down the Motorway to Goole. I am hoping that John can be a lucky mascot, if I remember right Boro' came away with a 1.0 win. I would certainly settle for that again! That will be twice John has witnessed The Rangers live, and be a 100% record.

Today is our only home game in January. We are pushing the play offs rather than struggling so please come along.
Saturday, we are at home! We need your support for the playoffs push, read more here: https://staffordrangersfc.ktckts.com/event/srf2122h14/stafford-rangers-v-hyde-united

Rangers v Celtic this weekend as Stalybridge come to Marston Road.
We've only had 3 home games this year, but Saturday sees us start 3 consecutive home games.
Currently have our best ever away record, 1 defeat in 13 games and in touch of the play offs.